The Way of the Knife: A Book Review 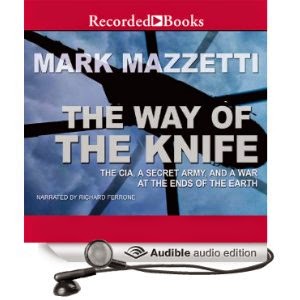 9/11 had a ripple effect the world is still dealing with. Universal surveillance, endless cycles of war and the erosion of civil liberties are all by products of the attack on the World Trade Center. The Way of the Knife focuses on the way, waging war and declaring war have changed for America in the 21st Century. The book goes over familiar ground in great detail, but it is ultimately unsatisfying.


The central premise of the book revolves around the military developing increase spying capability while the intelligence community devoted more of it’s time to killing than spying. The book explores the high level infighting between the Pentagon and Langley for control of the War on Terror. It’s a catalog of greed, bickering, turf battles, mismanagement and failed opportunities. Way of the Knife reveals many of the political and financial gains made by Washington elites in the name of national security.


I hoped this book would focus more on the experience of spies and soldiers on the ground in places like Iraq, Pakistan and Afghanistan. I had little interest in the back room deals made at the White House or the juvenile temper tantrums of our highest officials. Way of the Knife is enlightening and educational, but it gives too much attention to men and women who deserve condemnation and not more fame for their manipulations
Posted by Unknown at 10:55 AM