Batman and Psychology: A Book Review 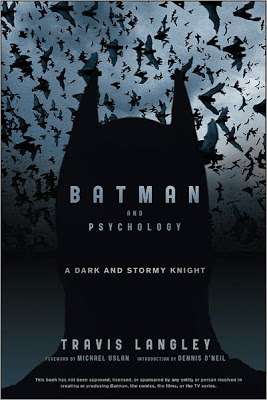 There are few pop culture icons that are more well known than Batman. His popularity transcends comics, TV and movies and has been built up for more than 80 years. While there have been many books written about the cultural impact of this character, the most recent one explores the underlying psyche of Batman and how readers relate to him. Batman and Psychology isn't an overly technical book, but it does shed some new light on this well known shadow.

Travis Langley's book serves two audiences very well; it exposes fans of Batman to basic concepts about psychology and introduces the Batman mythos to people who have a background in psychology. Langley achieves this balance by using the 80 years of Batman's "post industrial mythology" as the case studies for various mental conditions and experiences including:


One of the most interesting aspects of the book is the exploration of how these stories remain popular. Langley explores the effects that the stories have on the psychology of fans including discussions of Jungian archetypes, the hero's journey and plausible escapism. Once you reach the end of the book, you come away with a greater appreciation of the impact that Batman in particular and comics in general have on popular culture.

As a writer, I can't hope to create a world that will be as enduring in popularity as Batman, but I can apply the lessons of his character development to my work and imagine the possibilities of my characters becoming cultural icons if I just keep writing.