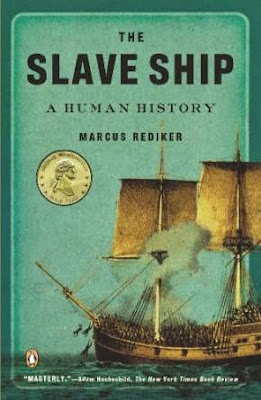 I’m developing a science fiction novel about slavery called Humanity’s Fall. The basic concept is Twelve Years a Slave meets Star Trek and follows the ordeal of one woman ripped from her brownstone in Brooklyn and thrust into the belly of a ship to be sold on the other side of the galaxy. The research for this book includes several sources exploring the impact of the Middle Passage including well-known works like Roots and Amistad to more general books like The African Slave Trade and Still I Rise. But as I get ready to write the first draft of Humanity’s Fall, I think the book Slave Ship: A Human History by Marcus Rediker will have the most impact on my story.

Slave Ship looks at the mechanism of African slavery; the ships and men who captured, bought, confined, tortured, killed and sold millions of people over the course of three centuries. It explores in depth the functioning of the ship, examining the vehicle of the Middle Passage from several viewpoints. The slave ship is seen as:


Rediker breaks down the Middle Passage in stages, showing how ships were commissioned and purchased, how captains and crews were formed, the process of buying people, attempting to simultaneously break their spirit but keep their bodies intact for sale, the successful and unsuccessful attempts to escape, overthrow or commit suicide and the complex social relationships spending months on the ship would create. By drawing a historical and narrative thread from the people most distant from the process (who gained the most wealth) to the people most suffered the most intimate pain and lost the most, Slave Ship makes an argument for the ship itself to be one of the most influential and at the same time most ignored elements of social development in America.

I read this book during the surge in media coverage over unarmed black men being killed in various parts of the country and the groundswell of racism playing out in various levels of society. In light of this reality and against the backdrop of building my own novel, I began to see parallels between our own time and the collective experience of the slave ship. It was easy to see the bankers and billionaires as the distant businessmen, too far removed from the process to have any interest in it beyond their profit. The police became the sailors and reluctant prison guards. The minority communities become the slaves and the incubator, factory, marketplace and communal space of the ship became the spaces we inhabit now, on and offline. The ship came to represent so much of the American experience, it became easy, perhaps clichéd, to imagine America as a slave ship we are all trapped on. Slave Ship will have a lasting impact on me, not just for the inspiration it provides for my work, but in the way I perceive the world I live in.