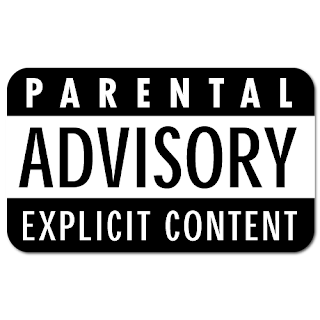 Recent events concerning the Great Erotica Purge of 2013 and subsequent discussions online have raised various issues for publishers. Independent publishers are even more sensitive to these developments because their books seem to be under more scrutiny. Other creative mediums have faced similar issues and have responded in different ways over the years, but one of the major responses has been the idea of informed notice. Is this response applicable to publishing? What are the benefits and drawbacks of this kind of warning? I'll take a look at this idea and the way that it applies to my own books.

It's not hard to find examples of entertainment regulation in American media. The film industry has the MPAA that assigns ratings based on content determined to be adult (i.e sexual). Television has a similar system, so do graphic novels and video games. Music doesn't have a rating system, but it does have the explicit content stickers for albums with "objectionable" lyrics. In addition, certain songs are recorded twice; once in its original form and once in a sanitized "radio friendly" version. Novels and theater seems to be the only form of mass entertainment that doesn't have some kind of early warning system. I can't speak to the theatrical experience, but that kind of system could have a definite impact on the selling and reading of books.

There are two potential benefits to placing explicit content labels on books:


There are four potential drawbacks to book labeling:
Self-Imposed Systems


After weighing the pros and cons, I've decided to try and put warning labels on my next novel, A Taste of Honey. Because the book is about criminal espionage, it might not be immediately clear that the book has sexual content (although some people will probably disagree with me). The way I see it, there is a benefit to attracting readers who like shows like Scandal. I also prefer to warn off people who are looking for a more traditional spy novel. There is still a chance that my book will be rejected out of hand by readers, but I'd rather have them not read it based on their own choice, rather than feeling like I tricked them.

What do you think? Are you willing to put a warning label on your book? Would you avoid a book with a warning label or would that make you more interested in the story. Please let me know with a comment.